Monique Y. Wells tells the story of her experience as Parisian through the lens of entrepreneurship, cultural exchange and la vie française.

Actually, I was part of a virtual ladies trip to Paris that my non-profit and two other non-profits put together.  And even though when we started, the time in the U.S. was 12 noon when we started which is 6pm here in Paris, the even was only supposed to last a few hours but ended up going over 4 hours.  So my husband and I were just buzzing about the event when it struck midnight here.

How many attendees did you have?

Technically, how did you pull this off?

It was a Zoom conference with the capacity to have up to 500 people on the call.  The production team was just fantastic-so I won’t pretend to understand the technology.  There were no groups in breakout, everybody was there.  The screen was there to show the video and other production graphics and people could scroll through the attendees at the top or on the side, and the chat was just lit. It was fantastic.

Was this the first time that you held a virtual trip?

No, it was actually the fourth time that we’ve done it.  We did a virtual walking tour live this past June, and used the video to do the NYE virtual event.

Was this virtual experience ladies only?

It was advertised as ladies only, but we did have one man in attendance with his wife.  But everyone else was a woman.

You are originally from Houston.  What prompted you to move out of the U.S. and to Paris in particular?

Yes, I am originally from Houston.  I moved to Paris because I wanted to perfect my spoken French.  I didn’t want to do it in a place that had a quote-unquote accent.

So I was offered a job, years and years ago in Quebec.  And first of all, it was too cold, let’s just be clear Quebec is too too too cold.  But the other thing was, I wanted to move to a French-speaking country so that I could speak French and have a beautiful accent and I don’t consider the Canadian french accent to be beautiful. So I was like ok, I’ll go to France and just figure out how to get there.

And how did you figure that out?

I used networking and made it clear to my mentors, my professors and once I decided to do that-just asked can you help me?  It took my own vacation time and spent money to come to France and speak with companies that could have potentially hired me.  The miracle story is one the day I was leaving France during one of my trips, I called one of my colleagues who had helped organize a trip for me to say I was leaving and he told me someone had just resigned where he was working and they wanted me to come back and interview.  That trip took place in October and I didn’t have any more vacation days-so the interview was scheduled during Christmas that year and I got that job, then moved the following summer.

You know Paris has always been a refuge for artists and in particular African-Americans like Miles Davis, James Baldwin and Josephine Baker.  Was that a part of your motivation?

No, not at all.  At that time I wasn’t even aware of that.

How long have you been there?

With respect to the Wells Foundation and your travel tours, can you speak a bit about this?

So the Wells International Foundation is working with my for-profit organization Entree to Black Paris.  And it is Entree to Black Paris that has 13 walking tours that focus on primarily African-American diaspora and experience in Paris.  We also have a nationally certified guide-a French woman who does our Black images and European art at the Louvre.

I am also a delegate for the Académie de l'Art Culinaire du Monde Créole and since 2016 we have done several projects and events together for people who come here and want to experience Creole cooking.  We have done several private cooking lessons for people who study abroad and private travelers.  And the Académie is set to begin offering virtual cooking classes for a culinary high school in Newark, New Jersey.

Do you personally lead most of your tours and can you walk me through one of your favorite or most popular tours?

Ok, so our most popular walking tour right now is our Jardin du Luxembourg tour and we have two versions of that tour.  My husband who happens to be American, actually created this walk and I have created all the other walks.  The Luxembourg tour was created at the request of a visitor who only had one day and one hour to do a tour and her hotel was near the garden so my husband made on up just to accommodate her.  He did that and she adored the visit and so we expanded that.   It is an open tour that lasts about 90 minutes.  People can request it online line with 48hours in advance and people can show up for the walk.

I did an expanded and different take on that tour.  My walking tour of the Luxembourg Garden is women-focused and it’s 2 hours long.  The vast majority of our tours are two hours.

We do have a couple of tours that are longer.  We have two on Josephine Baker, with one of those out of the city in a Paris Suburb where she had her mansion.  This one is popular, but it is out of the city and costs more.

But right now the most popular is the Luxembourg Garden walk because it is an open tour and is less expensive.

For our guided tours that I do, you must book six weeks in advance at least because of my schedule and it is a cost per tour not per person.  So it costs the same to do this for one person or if for a group of 15. 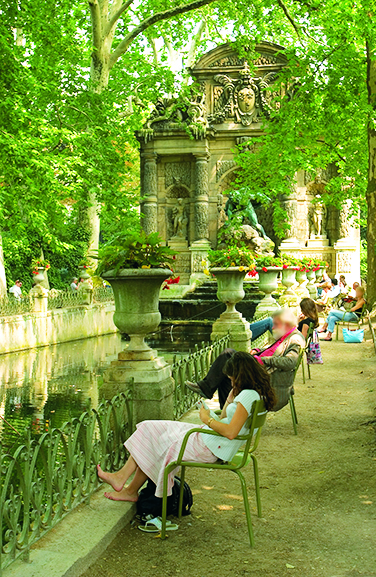 What about the Luxembourg Garden is such a draw do you think?

So, the Luxembourg is a beautiful space-number one. It is centrally located. And the history of black people in the Garden is completely unknown.  So it is a beautiful space and you learn all these amazing things.  And the other reason we like doing tours there is because for the vast majority of our walking tours there is no place to sit, you must walk or stand and there are no bathroom stops.  At the Luxembourg Garden there are benches everywhere, there is a fence around the perimeter with an embankment if you need to sit and then there are also toilets there.  Having places to sit and toilets is also very helpful if you are appealing to an older clientele-this is very important.

From the 1990s until today, beyond the advancements in technology-how has the city changed or is it pretty much the same?

So, first-the more Paris changes the more it stays the same.  We have on the outskirts of town near the perimeter, more tall buildings going up-it’s not a lot of them but there is building going on.  There has been a really strong push against the modernization of Paris.  We don’t want Paris to become a city with skyscrapersthis and things like that.  There are a few, but people are like-no more.  The view is going to change if you’re looking in that direction with the tall buildings.  I can already see with a building coming up, where I could see clear skies-now there’s a thing there-impeding the views.  I can see this even though it’s on the edge of town-I can still see it.

Now in terms of technology-everybody, like all over the world has a cell phone.  But one of the things my husband does to post on his Facebook page, is take pictures of people walking while reading a book.  We see that frequently and it is a thing.  He does this image collection called “French People Like To Read”, where literally you will see people walking down the street with their heads tilted reading a book.  And we just marvel at that.  People just don’t read on devices-their nose is in a book, literally.